To pick up where I left off yesterday, while I was letting those tape samples sit for a couple of days, I wondered what other tapes I could paint and decorate and use for random things.

So, I went rummaging through my bathroom cupboards at 2 am (as ya do. 😀 ) and found some paper medical tape, and some relatively wide sort of shiny fabric medical tape. I treated them both the same way I did the masking tape-I taped them down to the plexiglass on my studio table and I painted them. This time, though, I painted some with watercolors as I had been, and some with acrylics ( I used cheapy “art” acrylics in a tube because I had them handy, but I’m assuming craft acrylics would work the same way). I had my doubts about the acrylics because I thought they might dry too hard or flake off or something.

The top and bottom in this pic were done with acrylic, middle two with watercolors. 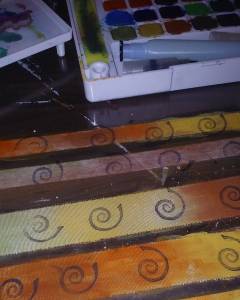 The top two are the paper tape, the bottom two-the shiny fabric tape.

I’ll be straight up-the paper tape sucked. The watercolors looked crappy and neither sample strip wanted to come up off the plexiglass. The watercolor strip pretty much shredded, the acrylic strip ended up being pretty hard and weird.

The fabric tape did much better. The watercolor strip worked really well. The colors were muted a bit, sure, but I like that. And it retained it’s shininess. The acrylic strip turned out alright. I didn’t like the way it changed the texture so I likely won’t use acrylics with it again. But it wasn’t the disaster I thought it might be.

Ok, so I rolled these bits up on straws and put them away because it was time to get out the earlier test pieces. 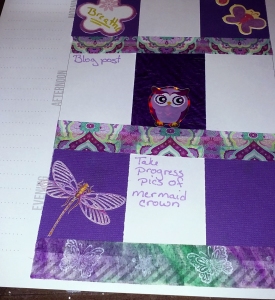 Here’s a page from my planner (Look, don’t judge, this keeps me from freaking out about everything, all the time. 🙂 ) taken from my phone in the middle of the night, because that’s how I’ve been rolling, lately. 🙂

The masking tape is still a wee bit transparent, like normal, and like washi. It is easily repositional and looks relatively cute. I’ll call that a win. 😀

Ok, so I did one last test with the spiral fabric tape strips. I wanted to see how they acted on paper. 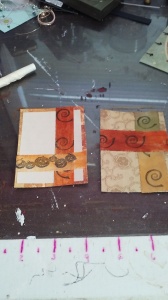 I like the way the masking tape and the fabric tape work, so much that I’m seriously thinking about adding some to the Etsy store, along with the other paper related things that are going up soon.

Either way, it’s a great way to add some personalization to your creative endeavors. I know I’ll be using these tapes all over the place!

Let me know what ya’ll think.

I may have a problem, I know. When I discovered pocket letters, I also discovered washi tape.

It’s basically decorative, repositionable tape. The term “washi tape” is from Japanese masking tape, which is made from rice paper, but the term lately encompasses quite a variation of products. You can use it to decorate all kinds of stuff. I even have some that’s colorable. 😀 (This pleases me so much!)

Anyway, as I always want to be creating things, I started wondering how I’d go about making some kind of decorative tape. After watching a few tutorials on “Making your own washi!” I decided to try it myself. I found myself pretty dissatisfied with the tutorials because none of them showed how or whether they would actually work in a project.

So, I set out to see what I could learn. Initially, my idea was to figure out how to make “washi” type tape. That’s not what any of this is, but it’s still pretty cool, and I’m already thinking about things I can do with it. 🙂
This is my first try. It’s plain old masking tape, watercolors and stamps. It’s a lot more muted than I like, and in fact, just kinda looks dirty (haha), but it served its purpose as a learning experience. The nature of the tape didn’t change any. It’s still mostly repositionable masking tape. And the ink is just random permanent stamping ink that I’ve had forever.

After that, I had a pretty good idea what I wanted to do, so I tried again, with several strips this time. I got better color with no loss of stickiness or texture, and this time I stamped with some white chalk ink that I had. This took longer to set/dry (I let them air dry) than the black ink, but once it was totally dry, it seemed set (It didn’t rub off on anything). 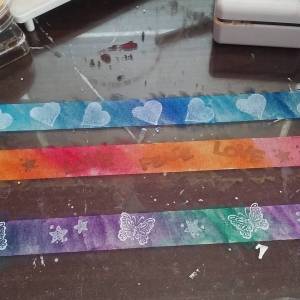 At this point, I rolled the pieces up onto a drinking straw (Well, first, I’d wrapped them onto a playing card thing that I use to stick washi samples on, but then hubby found a box of drinking straws in a cupboard, so I switched them. It was a good way to check restickability as well.) and I put them away for a couple days.

Tomorrow, I’ll talk about the rest of the experiment, how other types of tape worked for me, and the general outcome. 🙂

I’m pretty active on different sorts of social media both for Bramblefae Boutique and personally and I figured it would be a good idea to kinda go over all of it in case ya’ll want to see what I’m up to at any given time. 🙂

I have the Bramblefae page on Facebook, but I find that I use it less and less over time because, frankly, I seem to reach more of you folks through other means. Like Twitter!

I tweet about all sorts of stuff from video games and music to personal stuff (Not TOO personal. 🙂 ) and all sorts of Bramblefae stuff!  It is probably my favorite form of social media right now because I can talk to folks on the fly.  I can answer questions and even just chat with folks on twitter.

I love Instagram and sometimes I think I go a little crazy with all the picture taking, but there we are. 😀 This is right now the best place to get Work in Progress pictures, although I am trying a new thing.

That new thing would be Snapchat.  I still don’t know very much about how it works, but I do see that I can use it to show folks the progress of a piece throughout the day, so if anyone wanted to see what I was working on, while I was working on it, basically, they can go check out my story there.  If you have it, my username is (shockingly) bramblefae. Feel free to add me! If you don’t have it, download the app and then add me. 😀

All of that is not even counting Handmade at Amazon and the Etsy shop! Those two will continue to be the best way to actually buy my stuff (And to commission me!)

Of course that doesn’t take away what I do here. This is the best way to keep up with updates, and tutorials and such. (Yeah, I said tutorials. 🙂 ) Thank you all for keeping up with me and what I do in whatever media you choose, and for helping me bring my dreams to life. 🙂 Ya’ll are awesome.

Yesterday, we talked about how to begin working with me on a custom order. Today, we’ll finish!

The “Do not buy” is for anyone not you.  In the event that someone pays no attention and buys a custom order, I’ll just immediately refund them (minus the listing fee) and relist it.  That’s not happened so far, and it seems unlikely, by and large.

Once I’ve got the listing up, I will contact you via Etsy (or twitter DM or Facebook message) to give you the link to the listing.  Once you’ve purchased the listing, I’ll then get started!

How long it will take for you to get the finished piece will depend.  If I have to order components, obviously, it will take longer before you get it because I won’t be able to get started till I have everything. 🙂  And if you live outside the US, it’ll likely take longer to get to you.  🙂 And I work on commissions in the order I get them, so if I’ve got a backlog, it’ll take longer for you to get the piece.  I’ll let you know all of these things when we’re talking about it, before you purchase so you have all the info.

As you can see now, allowing me to make you a customized piece of jewelry is simple, and a custom piece is often far more special because you had a hand in its creation.  Also, I really do love working on custom orders, so don’t be nervous about asking for something special! 🙂

This is easily the question most asked by folks.  I talk a lot about custom orders because I love doing them. I love that kind of interaction with you folks. 🙂 So, in the spirit of making the process as simple as possible, I’d like to walk ya’ll through the beginning of the process.

First, you have to go to my Etsy shop. I like to keep custom orders and commissions on Etsy at this point for ease and protection. This way, everything is documented, so I can keep track, and both buyer and seller have protections to make sure you and I have the best experience.

Once you’re at my shop, you’ll see a button on the left side of the screen that says, “Request Custom Order”.  It’ll look like this:

Clicking that button will bring up a window that will let you tell me exactly what you want. It’ll even let you upload pictures, if you have references or inspiration pics to help explain your idea to me.

Once you’ve sent it, I’ll read it and get back to you with questions, sketches, clarifications, etc.  This bit of back and forth can be short and fast, or it can be a lengthy thing. I always try to make sure that my idea of what you want matches your idea.  Once we’re both very sure that we’re on the same page, I’ll then let you know how much I’ll be charging.  I base my prices on a lot of things-cost of supplies, time it will take me, how many pieces are involved, etc- and I try to be pretty reasonable with my prices. Who likes a crappy deal? 🙂

After price is agreed (And ya’ll, there is no harm in saying, “Ok, that’s a bit out of my price range, thanks anyway.”  We can then talk about whether there would be less expensive ways to do what you’re looking for, because sometimes that’s possible -by using different materials, or changing the design a bit- or we can leave it there.), I’ll set up a listing just for you, and I’ll talk about that more in tomorrow’s post!